Denver RnR Weekend by the numbers

1 Healthy Slice blogger friend who came to spend the weekend with me and run the Rock and Roll Half.
3 days (or at least 3 partial days) we got to hang out. :)
2 bloggers Marcia and I got to meet up with over the weekend: One at the oh so blah expo where we shared some laughs with the oh so fun Kathy. 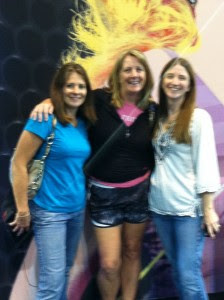 The other was the lovely Terzah, who brought her twins to my son's cross country meet.
3 hearty souls up bright and early ready to tear up the Rock and Roll course (or in 2 cases: slog through the course)
18ish times Marcia told me she felt like she couldn't get any air running.
18ish times I told sea-leveler Marcia she was running at 6000'.
4,567 times Marcia and I complained to one another about how much fitness we've lost, unwanted weight gained, and paces that are just plain sad in our old age the last year.
2 new names Marcia and I deemed ourselves: Thelma and Louise.
9 times we said, "These hills suck!" Impressive since there were only really 6.  Okay, 5!
3 minute potty break Marcia had to take mid-race. And 3 minutes I, devoted friend, waited for her.
1 cranky foot (mine).
.25 last mile where we actually ran "fast" and felt our old selves revived.
1+1 pretty blah shirt and medal (which look eerily similar to the San Diego RnR shirt and medal!!). 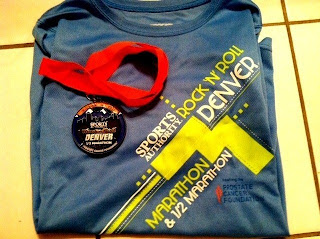 1 new mom who came downtown to cheer us on.
2 slices of post-race pizza eaten from my favorite downtown restaurant.
1 monster-sized cupcake consumed after pizza.  (And I wonder why I can't run well??).  At least it wasn't 3 at once...like someone we know...
8:30pm when Marcia and I called it a night after the race. I really know how to be an awesome hostess, eh? 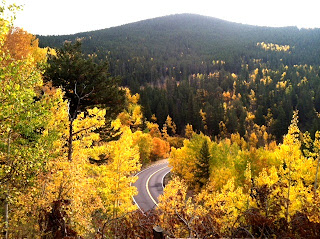 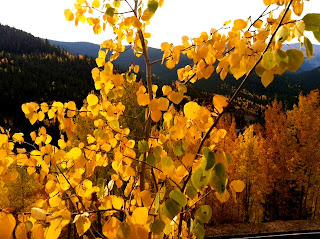 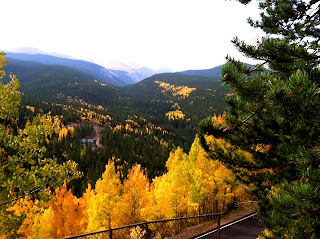 0 gallons of gas "Thelma" realized she had left while on our high country leaf hunting adventure.
11 miles to nearest gas station.
36 times Thelma may have said a swear word.
1 lake hike aborted in search of fuel.
2 sets of muscles not needed to push the car - we made it!
74 dollars spent on gas. That's a new PR!
1 new trail found to hike!!! 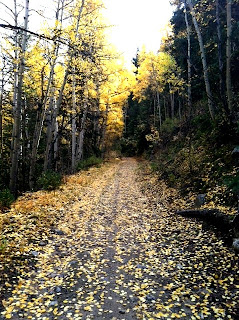 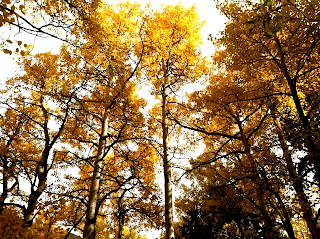 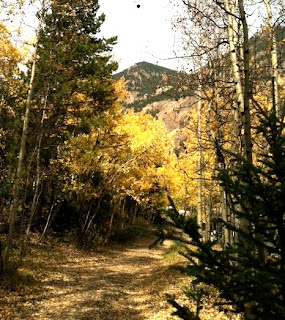 1 time Thelma almost fell off the trail and landed 800' below.
1 time Louise slipped and almost pulled a hamstring.
1 train spotted. 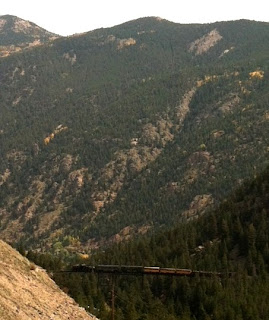 Foot update:
My foot issue seems to be slightly better.  I can turn my foot inwards and my ankle is no longer screaming, at least.  I had a pretty decent run today....so I'll continue to keep doing my PT exercises and hope the progress continues then next week I'll head to PT one ore time before Chicago.  I have succumbed to the fact I will be walking a vast majority of Chicago.  It's not what I wanted, of course, but I'm at peace with this.  There'll be other marathons.  I think.

Now it's the other foot's turn

I think there may be one or two blog followers still reading back from the olden days when I happily angrily wrote about my foot from hell injury for two solid years.  I don't blame y'all for leaving...who on this planet wants to read incessant posts titled "My foot injury part 3,492", "My foot injury part 3,493".....  when you can read countless happy posts of PRs, BQs and Pikes Peak summits!

But for the three of you who have missed my old foot injury rants, today is your lucky day!

I may have mentioned a few months ago that I fell and twisted my inner ankle.  Bad.  It didn't happen while accomplishing something noble like scaling Mosquito Pass during the Leadville Heavy Half or honorably running in front of a moving vehicle to save the life of a wandering child...

Oh no.  My misfortune happened while I was carrying a load of laundry to my neighbor's house when my dryer died, didn't see a step coming out of my house (you know, that same step I'm stepped down 5 trillion times since I've lived in my house since 1996) and down I went.  No one was home at the time to help me up; I sat immobilized on my front porch in excruciating pain for about 20 minutes....with my laundry spewed everywhere.  Nice!

Fast forward 3 months.... my ankle, and the arch of my foot, are a mess.  Apparently, when I fell, not only did I twist my inner ankle (very hard to do, btw - 95 of all ankle sprains are in the outside because our foot naturally turns that way) but I got the bonus injury of tearing some ligaments on the bottom of my arch near my heel. 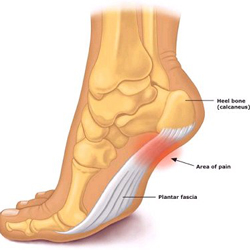 The good news is, I only have two heels so once this is all fixed, I can successfully check off "Heel Pain" injuries.  The bad news is I suspect I could potentially twist another ankle in my lifetime - or gasp something worse.  But I'm just going to pretend I didn't just write that last sentence.

More of the bad new stuff is this little annoyance has made running rather painful since the awesome incident.  The REALLY bad news is that I have a marathon in just about 2 weeks and I'm back in that familiar spot this year of being ill-prepared for an upcoming marathon.  I've been able to run in chucks of a few miles at a time and did lots of 2-a-days just to get in some miles, but the furthest I've been able to run for a "long run" has been about 10 miles.  I've run 2 half marathons this month, both of which  I ended up walking a lot (the first one I made it to an impressive 5 miles!  The second I made it to mile 10 - progress!).

Yesterday, I finally caved and made a return visit to my old friend, Mr. Physical Therapist.  PT-man and I became pretty chummy last year when my foot fiasco turn from an initial "4-8 visit fix" to a "let's just not put a number on this recovery, Jill" - which was well over an impressive 75 visits (and for which, at the time, I had no insurance.  Talk about ouch!).

Lots of squats and bends and twists and turns and pulls and yanks and pokes and even a few dry needles later, I am stoked to say: Nothing is severely - or permanently - damaged!  The short diagnosis is that when I fell and tore the ligaments, those buggers solidified thickly, as wounds tend to do, so when I run that thick amount of build-up is a little extremely unhappy.  The pain manifests in my heel, the source of the band, and my upper inner ankle, the point of injury.

Long time readers (all 3 of you :)) may recall my first race back to running last year - the Bear Chase Trail Half Marathon (well, technically it was the first "running" race...I did do Pikes Peak Ascent a month earlier, but I can't say I actually "ran" more than a mile, tops, of that race :)).  I picked that race because it was autumn in the Rockies and the aspen trees were glowing their vibrant yellows... 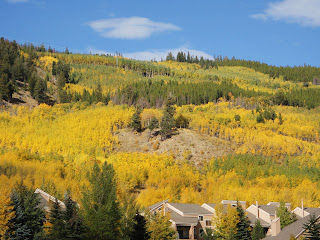 and it was a trail race (so I wouldn't hyperventilate about how slow my time would be) and I just thought it would be a fun event welcoming me back to the beloved racing world I dearly missed.  I told my PT about the race, which happened to practically be in his backyard, so he told me he'd give the race a go also.  I though was pretty cool,... at the time.  I signed up for the half marathon.  PT-man chose the 50k.  5 0 K!!! PT-man is not a runner....his "training" for the race consisted of 2 weeks of maxed 7-mile runs.  He finished - remarkably well, actually - and of course I was secretly envious. I stopped going to my physical therapist about 3 weeks after this race, when my PF and AT were finally turned a corner.

So it shouldn't have been any surprise to me when yesterday, the man who does not train and can still knock out incredible races, told me that I still could run "do" Chicago; I would not cause any further damage to my injury.  In fact, running on it would actually help stretch some of the thick band. (He's probably counting on some other ill-prepared injury for which I'll spend another year in his office in tears - ha!).

I still walk with a slight limp so I'm a little concerned, but I plan to just take the race really, really, REALLY slow and enjoy every second with a GRATEFUL heart.

In the meantime, I have 5 stretching exercises to do multiple times/day for the foot....and I need to start cleaning my house - because, folks, it's Denver Rock and Roll weekend and big-time blogger Marcia is coming into town and spending a few days with me for some quality girl-time (while I slog through yet another slow half marathon).  Can't wait....love that girl and always have a blast hanging out with her!
So that's the scoop and why I've been a little gun-shy getting ready for Chicago (well, the main reason) and running so incredibly sub-par this summer.  Maybe once this thing heals for good, I can get my act together and start running decently again.

I miss it.
Running well.
Feeling good.
A lot!
I've had some pretty dark, depressing days...
But ... I know it will be good again.