And on the 8th Day, God Created LOTS of Hills

I don't think God was really done on the 7th day and rested as they say in good ole book.  No, he had something else brewing in his head to prep me for my upcoming race this weekend:  HILLS!!   He made hills on the 8th day - and lots and lots of them.

I know, life is rough over here in Western U.S. and the scenery is pretty crappy, but you may not be drooling so much when you hear that the race climbs over 3300' over the course of the 33k race. Not huge by most standard ultra races here in the West, but considering my current fitness level is still in the slow build-up process, this is actually going to be a pretty tough challenge - scenery be dammed!  Yeah, poor, poor me...I know you're really feeling my pain.

But I love seeing 'hard', considering I've been plodding along for a few months in my slow MAF HR zone of 135-145.  Anything, pleeeeeease, just to get out of those super slow miles and change up the scenery.  Literally! But since 'vertical' and 'long' miles require a bit of strategic planning on my part, since living Suburbia USA doesn't equate to long, rocky, dirt-infested hill climbs, I bestowed the help of Beth from SUAR a few weeks ago and headed to a trail near her neck of the woods in Boulder, Walker Ranch. (super old news for all you who read her blog regularly...I think she posted about this run about 3 weeks or more ago, immediately after we ran it...but you know me and how long it takes me to get up a post :)).  It was a 2-hour commute (thank you rush-hour traffic) each way so the entire day was spent for this one run.  But oh what a run!

Considering this was my 2nd vertical run in my quest to not die in Moab, did we pick a dozie of a 'hill'.

I broke no speed records doing 1 1/2 loops of this 'baptism by fire' trail, where I climbed about 2850' that day, and demonstrated that my climbing muscles have some serious work to do.  Mountain goat Beth had to wait for me often, and her 7.55 mile loop run turned into probably 20 miles circling back for me, but running about 900' vertical feet before Beth got there made my muscle memory get a glimpse of what they used to be able to do and gave me hope that some day they might just be able to do it again. 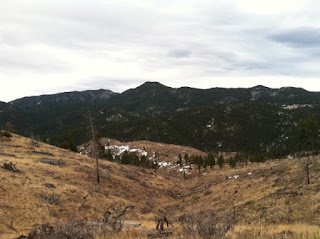 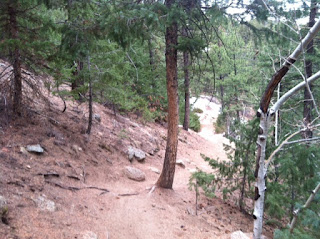 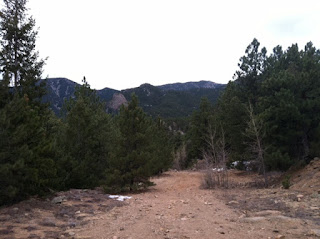 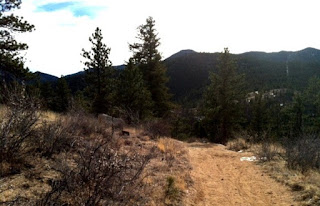 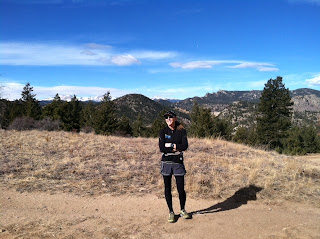 It was tons of fun to share the trails behind with Beth and I hope to get up there soon again.  Maybe Beth will only have to do 18 miles next time :).

Last week, I had one last long vertical run before Moab but the germ-infested petri dish I work in got the better of me and decided I needed to battle a stomach virus instead of my long run.  Bummed, for sure, especially after spending the entire weekend on my bathroom floor hugging the commode instead of 3 key workout days I needed to do, but I did get in a little medium length run on some snowy trails before the stomach decided at mile 14 that was enough. 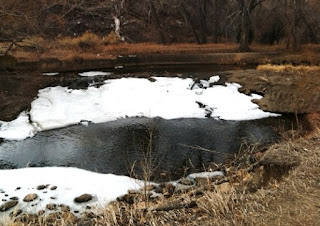 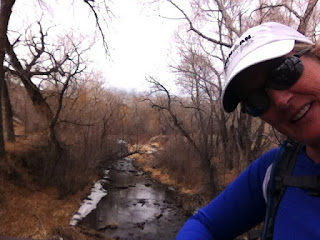 So that's a wrap as far as training for Moab goes.  I'm not going into the race in tip top fitness, that's for sure, but I have made some ground tackling some hills and I hope it's enough to get me up them in Moab feeling good.  A lot sort of rides on how I finish in Moab in terms of what comes next; I have no real race plans for the rest of the year (with the exception of the Boise Half IM) so we'll see what this weekend's hilly race produces and where my next adventure takes me. Regardless, I'm sure there'll be plenty of hills involved - I actually can't wait.