How to Race CIM in 38 Steps

1) have friend (Katie) pick me up at 430am for 8000 hour drive to California.  In the coldest weather recorded on earth.  Ever.
2) drive an hour to realize said friend dropped her phone in my driveway when she picked me up.  Drive back to get it.  In rush hour traffic.  Actual departure time is now 3 hours later than planned.
3) stop in Laramie, WY to get gas.  Car thermometer reads a balmy -21 degrees (without windchill factored in). OhhhhMyyyyGodddd! 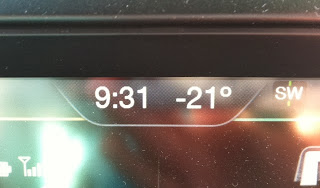 4) toes take eternity to thaw out, just in time to get out of the car again for more gas.
5) 3 dogs tagging along for the fun get into dog fight and bite Katie's finger.
6) adorable 4-year old, also tagging along, has a melt-down about being stuck in the car for 400 hours (who can blame her?).
6) stop in Elko, NV for the night in raunchy hotel.  If you've been to Elko (who the hell would?), 'nuff said.  If you haven't - no need to rush there.
7) day 2 of eternity car trip from hell: eat shit all day. 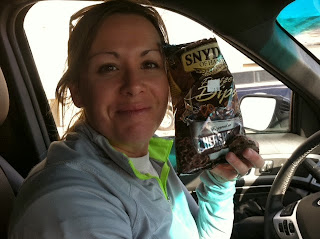 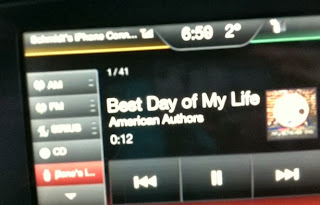 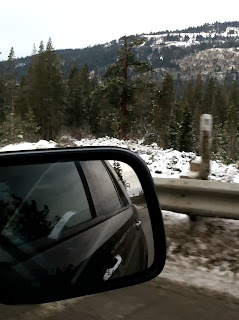 13) arrive at Katie's parents' house only to instantly go lie down for 2 hours due to severe car sickness.  I'm such an awesome guest!
14) invest in multiple bottles of Pepto Bismol.
15) go for a 3-mile run; want to die at a 10:30 pace.
17) go to expo and receive the ugliest shirt in my 37 year racing career. 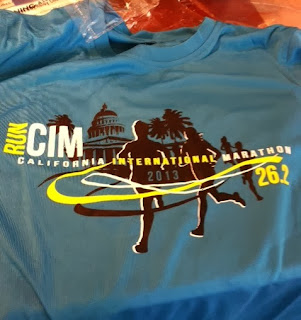 18) listen to speaker at expo announce to crowd, "32 degrees is freezing.  Seriously, 32 degrees is freezing, people.  It will be colder than freezing at race start.  Remember 32 degrees is freeeeeeeeezing temperatures..."
19) not thinking California would be gunning for record low temps, I brought no freeeeeeeeezing temperature race apparel.
20) shop at Good Will for race-day throw away clothes.  Buy Pepto Bismol colored pink down coat (yes, the Pepto is now becoming a theme).  Gawd, I miss that coat.
21) Katie's aunt (who graciously allowed me to stay the night there, and fed me - or at least tried to) looked at me at our night-before-race dinner and proclaimed, "You look a little green."
22) Drink Pepto Bismol for pre-race dinner.
23) Drink Pepto Bismol for race morning breakfast. 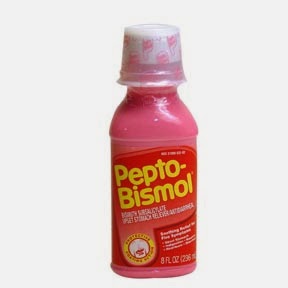 24) line up at start line with 3:55 pace group.  Wonder what the hell I'm doing here.
25) face plant at mile 2 (yes, that's correct, this a road race).  Leave some skin on the pavement from the knee, tweak the shoulder, bruise the hip, and rip two half dollar sized holes in the palm of my gloves. 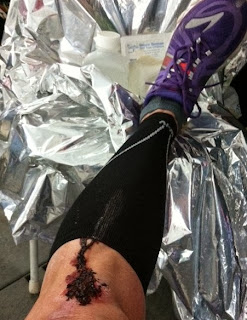 26) try to run by effort and not look at my Garmin for assistance.
27) bahahahahahaha!
28) effort feels too fast....so I speed up (and leave the pace group behind).
29) mile 10: think to myself that I should have done more uphill hill work (apparently 6 months of vertical Leadville training was fruitless when you take 4 months off from it.  Who knew?).
30) miles 10-20 are some of my fastest miles.  I feel great, perceived effort be damned.
31) mile 21 I start to slow.  Imagine.
32) mile 23 feels like death would be a better alternative to continuing on...then all of a sudden, Jesus appeared out of nowhere to read me my fate. 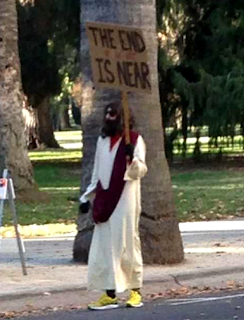 35) actually choked up when medal (also ugly) was hung on my neck; it suddenly occurred to me I just wrapped up what has been one helluva incredible racing year.  I truly couldn't be more grateful!  A storybook fairy tale ending. tear.
36) rectified ugly race shirt with new, awesome shirt! 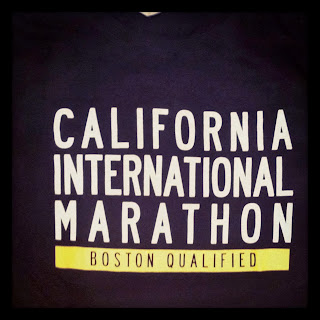 37) gave Katie the BIGGEST hug when she crossed that finish line - her very first marathon - with absolutely zero stomach problems.  The girl's had one disastrous long training run after another due a protesting stomach. Thankfully (?) her mom recently had knee surgery and gave Katie one of her anti-nausea prescription meds prior to the race.  It worked like a charm, and Katie was beaming (and she didn't have to down 4 bottles pink chalk tasting crap, like someone). 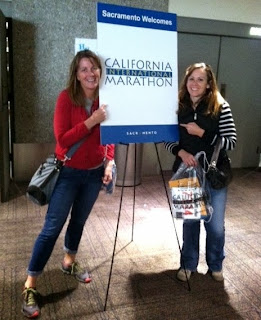 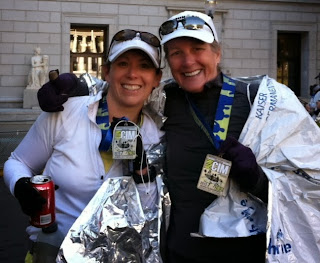 38) Not my speediest, but for the effort I put going into this race, it was an incredibly amazing day!  And I was delighted to share it with this mighty fine woman!

Trying to find something to say about my pending marathon, because I feel like there should be words here for it. 26.2 miles is a long way, long enough to appear something of an impossible stunt to a new coworker who hasn't been introduced to marathons as things that exist. But I don't have much to tell her, nor have I had much to tell you, because my heart just hasn't been into the training for this race and I'm left with a few days until race day, scrambling to figure out what I CAN do.


It's not that I don't want to see how fast I could go. I want to know. Rather badly.  I'd really like to BQ, if I'm being truthful (even though I don't have any real desire to go back to Boston).  I haven't raced a road marathon in 4 years, but I can still feel the pain of those last few miles, when the body tells you to stop because you've overworked it, and yet you must ignore those warning - if you want to do well.

And perhaps that's the problem.  Road marathons are cruel, in that they make you run - and run hard - the whole way. No stealing breaths on hills or overly technical sections like in hilly trail ultras have taught me.  And the result is what it is. You are what you ran that day, not what you thought you could do, not what that one workout said you could hit that you totally nailed a couple weeks back.  There's no room for error.  In a fifty miler, stopping for an extra few minutes at an aid station or walking because you're freaking tired won't bear much effect on your race.  Do any of those in a marathon and your goal is screwed.

My training for CIM started out well - I was hitting all my target runs on my plan.  For about 5 weeks. Then November struck.  I got sick.  I Lost interest in training for something.  I developed a glute "thing".  Lost even more interest.  I defended cake for dinner as acceptable nourishment.  And the illness - whatever it was/is - decided to hang on for weeks.  I even had a stretch of 5 days in a row in November where I didn't run.  O-M-G!  I found myself wanting to run for the sheer joy of - running.

Training for a road marathon takes a commitment of time to build up leg speed; my speed work for CIM can basically be summed up in the two races in November I did. 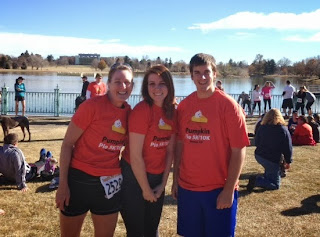 We all ran our own races. Out of pure habit, I ran outside of my comfort zone and was dying by mile 1  and progressively got slower each mile.  Abbey and Brendan ran together for the first mile and I got to see them as we weaved back around towards the start.  It warmed my heart to see my two, the ones who don't run, together, running.  I finished a solid minute slower than my last 5k six weeks prior, which I will contribute some of that sluggishness to several tight, hair-pin turns, which left me disinterested in revving my pace back up. But some of that slowness is because I've lost fitness in those six weeks.  I managed to place first in my age group though and scored a sweet gift certificate. 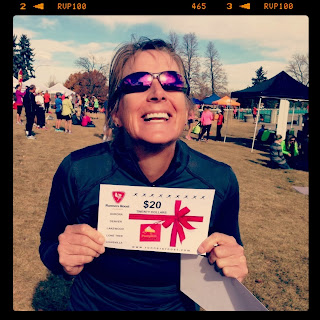 I shuffled back out on the course and ran in Brendan, then back out again to bring home Abbey.  The girl is running...and smiling! 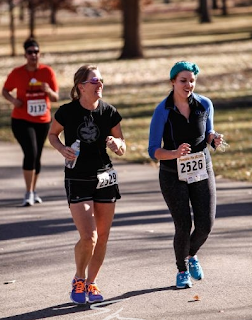 We then ate every last crumb of post-race face-sized pumpkin pie and called the birthday a happy one. 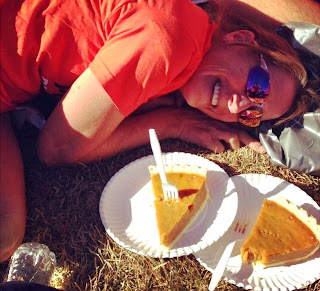 Thanksgiving day marked the 40th running of the Mile High United Way 4-mile Turkey Trot.  I've run this race a handful of times, but not in the past several years.  I was invited to race this as part of Runner's Roost, a local running store here in town, and I represented the store where I work from time to time.  I really had no intentions of racing the thing; moreso I wanted to get a feel of 'marathon race pace'.  But when stores compete against one another and food is the prize.......

Wouldn't you know, the non-running child was there with me again - running.  Brendan had a great day and ran far better than he hoped.  He even enjoyed it.  I like to think I'm creating an epidemic of Parker runners. 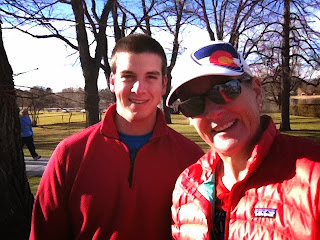 4 miles is a long way to race, hard.  It's like racing a 5k but enjoying an additional pain-staking I-feel-like-puking mile.

I was impressed with my first 3 miles, where I kept consistently in the high 7:30s, which was faster than the Pumpkin 5k.  The last mile, the one where the brain said it was time to stop because we had hit the 5k mark, was an unimpressive 8:04.  And I wasn't even running up a hill to earn that deplorable present.

Our store lost overall (but I was an entire 3 minutes faster than my predicted time since I had no intention of racing it when I sent in my prediction) so no food was won but overall I was pleased, considering this was my 2nd speed workout in my CIM training.  Basically.

So I sit here and consider my options for CIM, on the eve of the eve when we head out of town to Sacramento.  My friend, Katie, is driving us (she will be staying with family the entire month; I will be flying home on Monday).  This is Katie's first marathon; I'm super excited for her and thrilled I could be a part of her journey as I helped guide her training.  I'll have more time to ponder my race in those 20 grueling hours on the road....

I could hang back and enjoy the atmosphere of the race (like I essentially did the past 5 road marathons and the trail marathon I did back in October) since I only half committed to my training, and thus not beat myself up if the race unfolds poorly.  Maybe I could even run with Katie; that'd be fun!

Or maybe I can push myself out right out of my comfort zone, kiss this glute issue and sinus/chest cold goodbye, dig deep, and try to remember that I like to do hard things.  I mean, isn't the merit of things embedded inside the difficulty at hand?