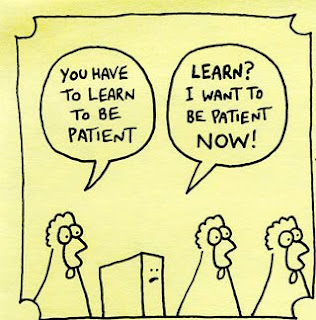 Time to write down my dreams for the year....be bold and ready I say, because if I write them down and put them out there, well, anything can happen, right?!

Why I was so frustrated that this slower than molasses in January progress my running is taking was also frustrating me.  Frustrated that I was frustrated.  Awesome!  (That always makes you sleep well at night!)  I've been a girl who has always had a race goal and then trained towards it.  (Well, let's just not count last year!)  But after Chicago last fall, my intentions in hiring a coach was to have him help me get fit and ready for whatever I decided I DID want to do.  Fit first.  Race second.  I had no real races scheduled for this year (other than this one - yikes!), but as the calendar flipped, I couldn't help it, my head wanted to race, because I'm pretty sure it's illegal to sit out too much of a year without racing.....and one race in particular started stirring in my pea-brain, and this was a little trail race this summer.

So in preparation for my little 'maybe' trail race come summer, I signed up for a 33k trail race in Moab - which just happens to be in about 3 1/2 weeks - gulp.  I won't 'race' this race, I am no way race ready (and it's super hilly, as coincidentally is my little summer trail race) - I just want to use this race as a test, of sorts, to seek out my mental self and give my physical self a check to test it's current fitness.  If all goes well in Moab, then I'll click that 'register' button for that summer trail race... if it doesn't go well, then I'll just cry and pout and blame everyone in my path (except myself! :)).

Last week my plan had a "long, vertical run" in prep for the Moab 33k.  Mind you, I've been in super slow MAF training for 3 years months.  3 months of crawling, want to slit your wrists, relatively flat miles. "Vertical"  and "long" in one workout had previously been non-existent so this was Pretty.  Dang.  Scary to see it on the week's plan.

I literally spent hours deciding what trails were the ideal verticalness for my weak climbing ass glutes and hammies (and you wonder why I don't blog much??).  I decided on a place where I thought there'd be an ideal amount of 'up'; a trail that's on the other side of town from where I live, so a bit of a jaunt, but I ran a race over there a few years ago and had a blast. I thought it had a the right amount of climbing without it (hopefully) killing me.
I started the run feeling anxious yet ready to roll.  But as soon as I started, instantly something felt off and I started to get really frustrated.  I can't even tell you what was wrong other than my pace was ridiculously slow and it was - well - frustrating (my new favorite word, apparently).
I climbed the first hill...Mt. Carbon.... 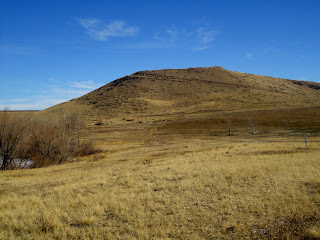 Had this amazing view from the top looking to the west... 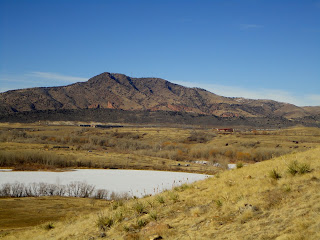 And to then to the east...
Ran down the back side of Mt. Carbon and across the now frozen streams... 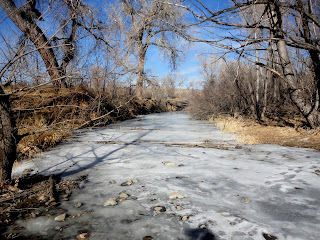 Back up some big-ass hill and greeted to this ... 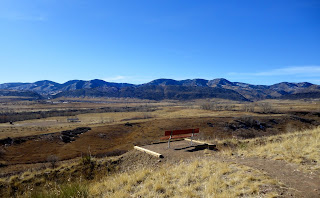 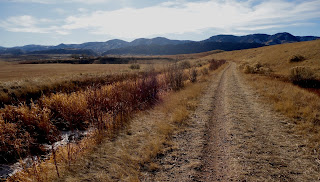 And back down the hill to my car with about 8.8 miles in one loop.

And I feel like hell.  My back and neck hurt from my Camelbak.  My head was pounding.  My legs ached.  My glutes were on fire.  I was breathing hard.  My HR was high.  I was tired, hungry, and my water tasted like crap (I'm certain my son used it climbing recently and didn't wash it out.  Yeah, let's blame him).

This: The PROCESS of wanting something so bad I don't care how much I hurt to get there.  The process of getting "there" when there really isn't a fixed point other than getting fit.  The process of watching my body slowly transform into a runner's body again and away from the pathetic blob of a  mess was in.  The process of working hard to reach some arbitrary goal that I'm not even sure what it is.  I am noticing changes for the first time in like - EVER!  And isn't that what this is all about?  Without warning, it suddenly was!

Patience, patience, patience.  I haven't had much of it in these past few months (as my coach can attest :)) but suddenly, as I hit my 2nd lap feeling like regurgitated dog food, I just felt a sense of calm and peace and I embraced the new process of meeting myself right where I am.  I cranked out those next 8.8 miles - at a pace that resembled a child learning to crawl - and I didn't even care.  I finished it - 17.6 vertical miles.  That is progress....

and next time I'll finish it even stronger.

I'm not sure how, but somewhere out there in that long, vertical slow run, I have found peace in learning to live in the "now" -  and that's what my goal for 2013 is going to be: Trying to stay patient.  I don't allow myself to have many moments in my life.  I rush and worry and have cereal for dinner some nights and I sort laundry and I yell at my kids to do their homework and I sometimes sleep.  Having moments is not usually on my agenda.  But today was a moment!!   I will get stronger.  I will get even fitter.  And eventually, I may even get faster.

But for now, I'll embrace where I am at while holding on to the intentions of where I want to be (thanks, Kim :)).  It will all happen....with a little patience - and a hell of a lot of hard work.