I can't believe it's been over 3 months since I last wrote on this blog, but then again, I can.  Two graduating kiddos and all the flurry of end-of-the-year activities have been consuming life.  Band concerts, track meets, more track meets, award nights, graduation thises and graduation thats.... 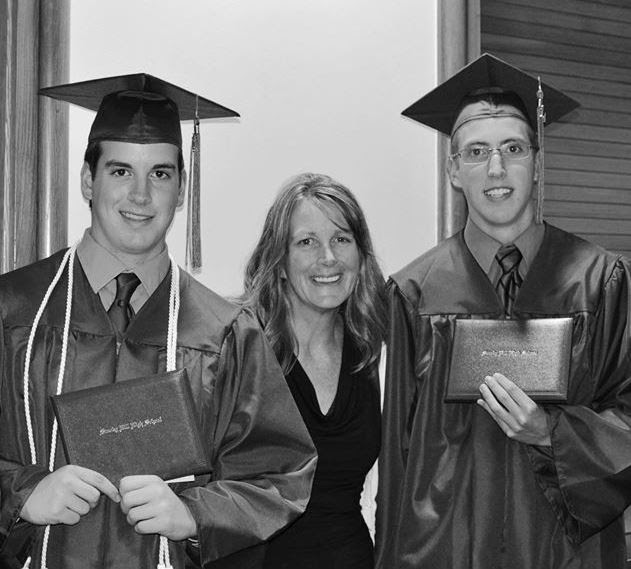 I've been running some. Not as much as I would like, but most runs seem to be a temporary calm from the flood of emotions I feel as these two guys head in very different directions later this summer.  I'm happy for them, truly - and very proud of course.  But it's not been an easy task to make myself get out there many days over the past months.  Not solely because of my soon-to-be lonely, empty house, but also because of a lot of other life stuff.  Hibernation from the social realms has just been easier than to continuously explain what I've been up to.  Or worse, haven't.

I came to realize, pretty early on in the year, that this was not going to be a year of stellar race performances for me.  Not that I have anything to prove to myself (or anyone), but I come from a very competitive background and performing "well" was always my race goal.  "Well" doesn't equate to a PR at every race (I'm SO beyond those days); it merely meant I put forth an effort training hard and reaped the rewards from all that hard work.  It's been difficult to let that go and accept that I just didn't have what it takes right now to put in the required time and I'd better accept "good enough" and "I survived" on race day.

Through the wonderful power of the Interwebs, a woman I crossed paths with last summer, someone who helped me immensely at Silver Rush, suddenly reappeared in my life right around the time I finished up the half in Salida (last post).  Melissa registered for Silver Rush this year, her first 50-miler (also mine last year), and wanted some company on the trails prepping this spring.  Last year I probably trained 99% solo for Silver Rush yet strangely here I sat this year feeling sorry for myself that I had no one to force me back on the trails - especially since I had some impending seriously vertical trail races looming.  So her timing was impeccable.
Due to Melissa's annoying habitual Tuesday, "Let's meet at Mt. Falcon tonight" email nudges (a fairly steep climb in the Denver foothills), I have been up that mountain trail more times this year than I have all of last year (and last year this place was a regular Silver Rush training staple).  These runs haven't given me massive mileage, but they have provided me some decent vertical climbing.

And just like that, the series of races I enlisted upon myself were here.  Without a solid base (and whopping 14 mile long run) I entered my races with a, "Just get 'er done" approach.
This race was a teeny thing - a whopping 22 of us (49 is you add in the 20k-ers) and located in a state park at the base of the foothills.  It wasn't challenging in regards of vertical climbing, but it had its own set of tests with a course that wandered through water crossings with swiftly moving currents and various sections where there was absolutely no trail and you had to follow course markings carefully (a challenge for me who can get lost on a 400m track). 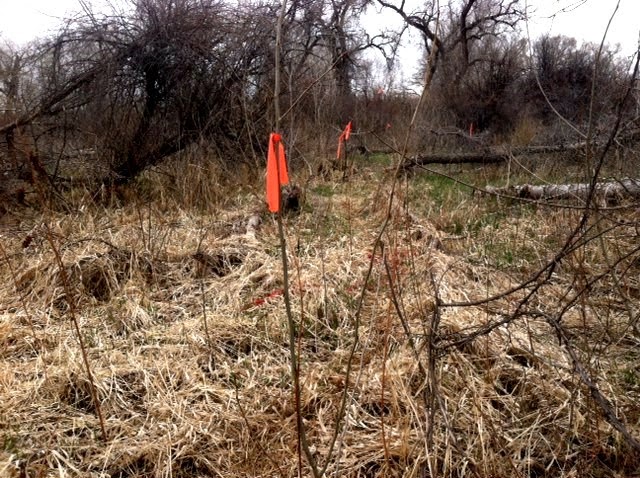 But it was a gorgeous day and those little icy water crossings were like little angels of heaven on my legs - I finished that race running way more than I thought I would - and smiled every single step of the way.  I had an absolute blast! 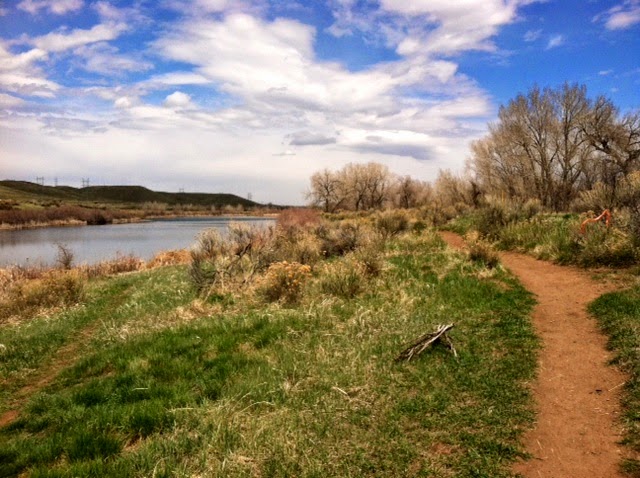 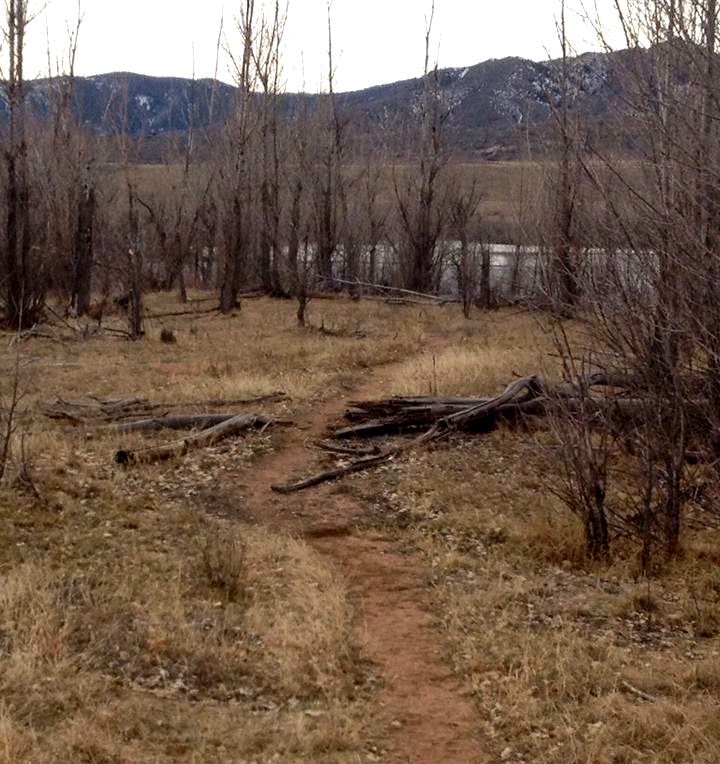 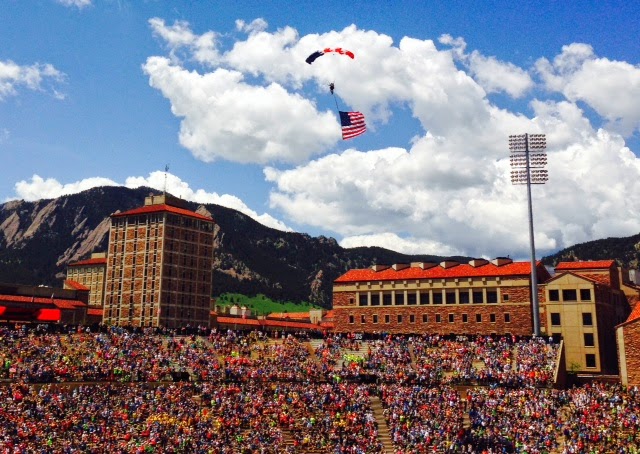 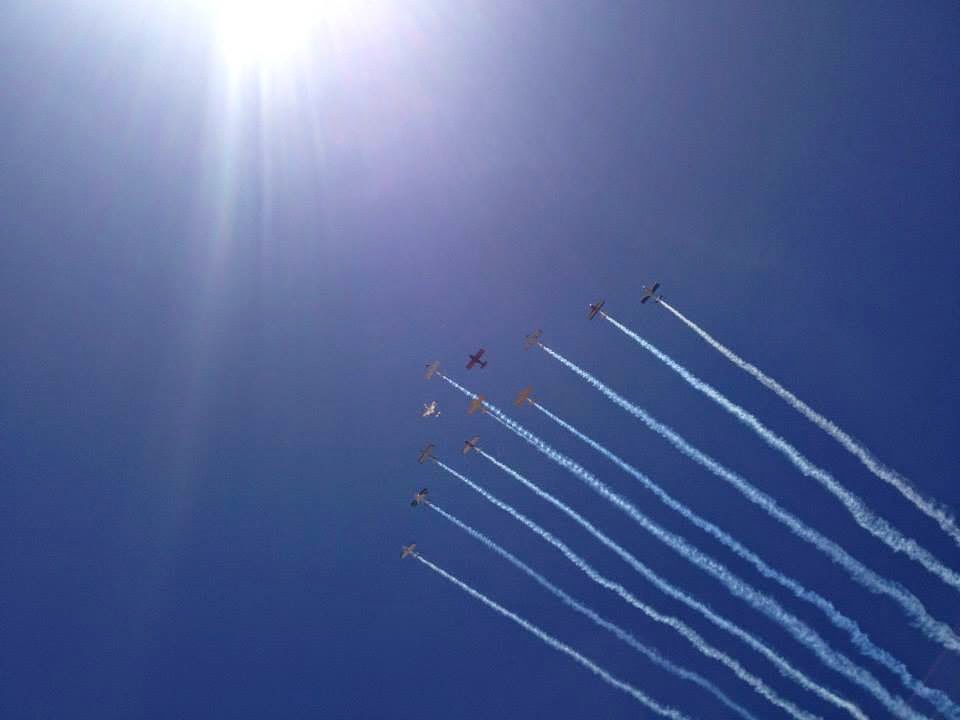 And breakfast with some dear friends (who helped crew for me at Leadville last year) was divine! 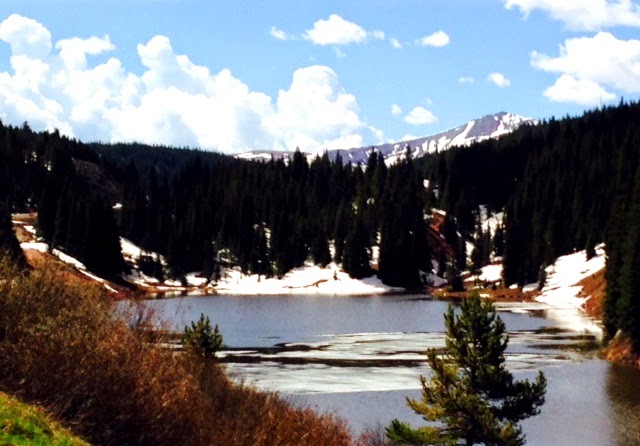 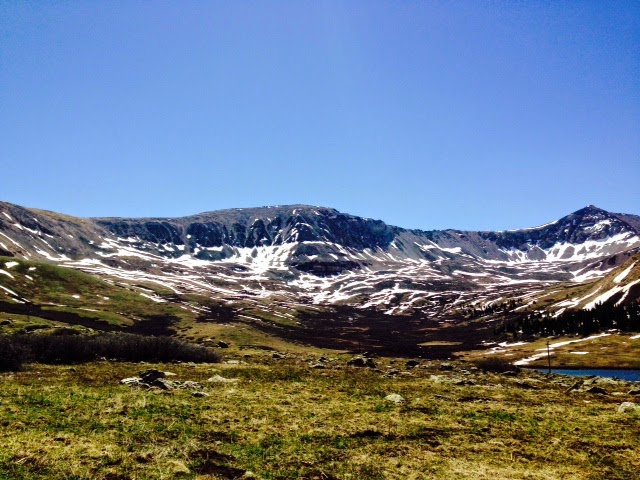 Lots of climbing early on so I took a conservative approach and did the "walk when it's up and run easy when it's down." I felt great heading into Mosquito Pass around mile 12, when the race starts a 2.5 mile climb with about 2000' of elevation gain. Sucks. So. Bad. Not only is the pitch of the climb enough to choke on a lung, the trail is full of loose rock that makes is extremely difficult to plant you damn foot without breaking an ankle.  Add some snow and 40 mph winds and whalaa, I left that "good" feeling smack at the base and wouldn't pick it up for a few more hours. 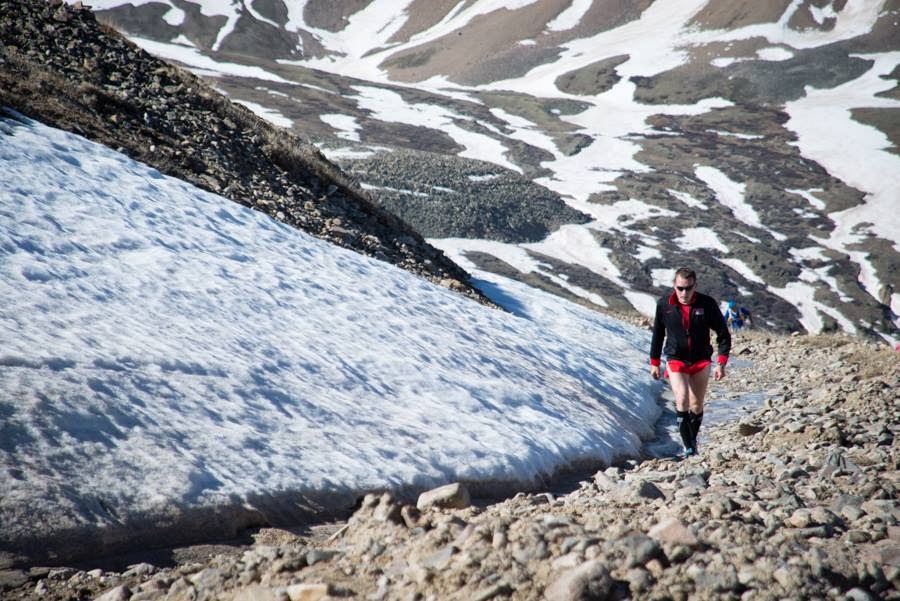 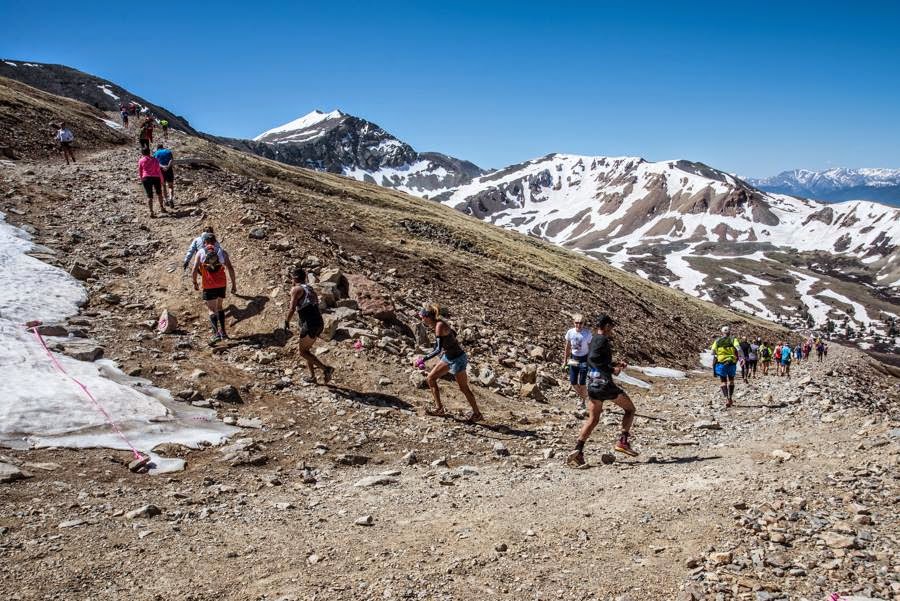 Many times I screamed I wanted this climb to end while making small gains to the top of Mosquito. But I wouldn't let myself get my head in a bad place; I knew that'd be the kiss of death having so much more left to do.  I just climbed.  And climbed and climbed and swore and promised God all my children if I made it to the top alive and climbed some more.  And eventually I was treated to the summit, at 13,200', and greeted by the original race founder, Ken Chlouber, who was personally thanking everyone who got up there.  I won't lie, I got a little choked up. 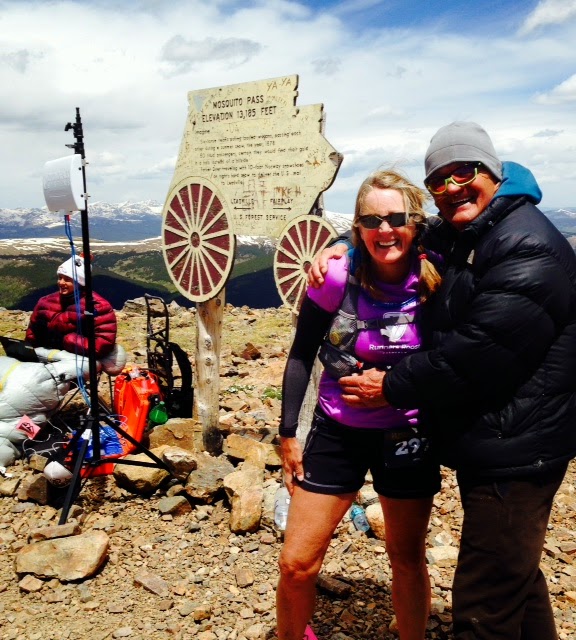 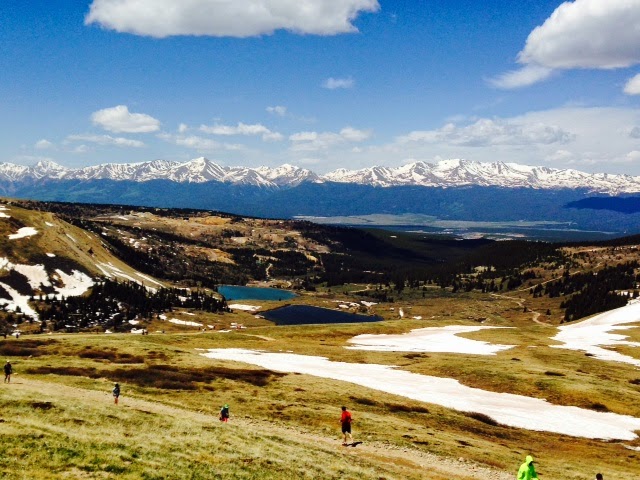 I quickly headed back down, trying to remain upright on that loose spree rock while dodging runners coming up. I tried to be encouraging to all; many looked liked hell (there had to be some that just didn't make it).  I surprisingly ran well down, keeping my eye on a target girl with light blue shorts so she wouldn't get out of my sight.  We played leap-frog back and forth for the next few hours and this became my distraction all the way to the end (she got me the last mile). Another suck-ass climb due to a reroute of the original course because of excessive snow on it, but I was surprised how I started passing a lot of people here.  Once at the top (1300' in about a mile, gah!!!) I could tell I was getting tired.  When the aid station guy said we just had 6 more miles and one more 2-mile climb, I did the math where exactly I was for the first time that day and knew I would make the cutoffs, even if I walked the entire rest of the way.  Aside from the small bit of fatigue, I felt remarkably good and decided I'd just gun the downhills.

I passed probably 15 people on the last 2-mile stretch home as most people were walking.  But I felt great and was running well.  The last mile is always a doozie because you turn onto the street with the finish line about 3/4 of a mile ahead and you can see it FOREVER and just want to be done!  But I ran, ran hard, and crossed, beaming, in 6:38. FAR exceeding the 8-hours I thought it'd take me.  Elated!
Despite all my fears entering this race, I felt strong the whole time, and due to Melissa's relentless emails to hill train on Mt. Falcon each week, I never completely obliterated.  After the race, I wasn't particular sore, just extremely sleepy and famished.  I have her to thank.  And I have.

Training goes in waves, I think.  Sometimes it flows better than others.  It's not my year to be knocking out some crazy age group wins and times on my watch that I'm super proud of, but the races I've done this spring have taught me a lot about myself and how much grit I can push out of me when I want to.  And I've had a ton of fun.  And really, isn't it why we do this sport in the first place.  I think so.

As Spring turns to Summer, my race calendar is empty as is my soon-to-be house.  I think a lot about how I'm going to fill the next phase of the year racing, but more so, how I'm going to fill in the next phase of my life after the boys are gone.  I know they will always need me (as does my 23 year old daughter), but my roll is changing and losing its usefulness (thank you, Petra!!) and that is a bit scary, yet exciting.  I have no firm plans but quite a few paths I'm exploring.

Until I fill in the blanks, I'm sure you can find me at the base of Mt. Falcon every Tuesday night, preparing for whatever IT is.