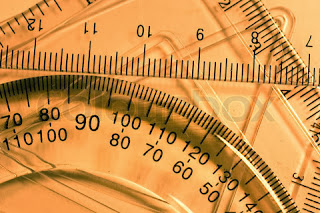 In case you didn’t already know this, I’m a very competitive person – surprise!  I have found that while I enjoy just running for the sake of being outside and keeping myself sane, racing generally motivates me and I love (though I rarely speak to) being around like-minded running obsessed freaks soles. I enjoy running for more reasons than I can explain, but part of what I love is pushing myself and learning what my body’s and mind’s limits are. Races are at the core of helping me define this….I have probably raced over 500 races (which includes my high school and college racing career).  How do you take the racer out of the runner who’s taught herself over the course of 37 years that there’s no bigger high than crossing that start line of a race?  You can’t, not really.  But I am learning some valuable lessons....

- October 6th I ran the Blue Sky Trail Marathon on the outskirts of Ft. Collins in Horsetooth Reservoir.  It was a beautiful Colorado bluebird sky morning as a total of 161 of us toed the line on this deceptively challenging course. 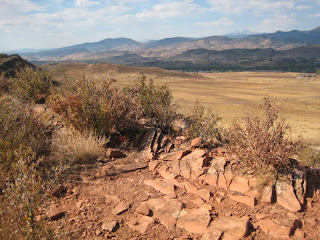 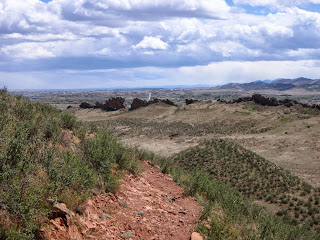 If you’re waiting for the part where I landed on the podium and smacked down a stellar race time, well, you’ll be waiting a long time.  This was not that race.  I could write out a handful of excuses why, but it just wasn’t in my heart to beat the crap out of my body on the trails.  I realized early on, when I saw a woman there whom I beat by over a half hour in Leadville take off and leave me in the dust, pretty much all my vertical uphill training I did for Leadville is a distant memory.  Being an active participant of Racers Anonymous for the past 37 years, it took me a solid 6 miles of stressing over my watch’s dismal display that I needed to take the damn thing off and just enjoy being back out in nature and not an have an existential meltdown by not meeting some irrational number I set upon myself – which was unrealistic in the first place since this race had about 3500’ of elevation gain and was more in the lines of 28 miles.  At mile 6, I decided it was time to turn the watch off and instead look for an endorphin bath, not an ag win!

The course was an eclectic mix of challenging terrain  But wow was it gorgeous!  I found a guy who I felt was “slow” but decided slow was what I needed if I wanted to finish strong, and I let him dictate our pace for about 9 miles - I stuck to him like glue. 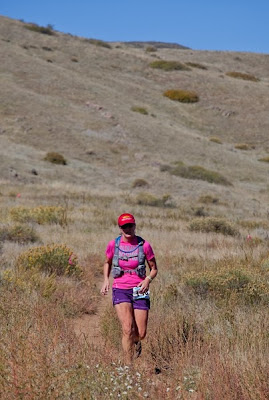 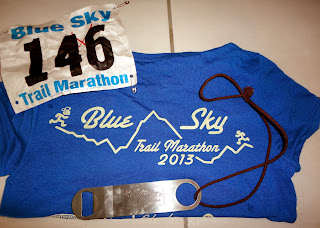 - October 20th I embarked on my 4th Denver Rock and Roll Half Marathon. The half marathon is my favorite road race distance; the strategy of learning the perfect cocktail to hold onto that threshold of pain for that distance excites me.  And scares the crap out of me.  I've killed a half marathon (or 20) by going out too fast at the start, thinking I had it in me when I didn't.  This could be one if I wasn't careful.

I really didn't have any wild expectations for this race.  I had wishful thoughts when I registered in the spring that I could knock out a good race here considering I was killing most of my races back then.  But after Pikes Peak Marathon my running took a nosedive - or at least my desire to want it did (Leadville training completely consumed me and left me empty after....but more on that in another post).  I'm still running and loosely training for California International Marathon in 6 weeks, but I gave up the notion I could run this race "fast" and just prayed I could somehow squeak out a sub-1:50 - even if it was just barely.

I wanted to line up with the 1:50 pacer and let him do the work (the guy in the blue shirt from Blue Sky was nowhere to be found), but they were in the wave behind me, and good lord I wasn't going to move back a wave-  gasp.  So I just ran.  I know that sounds too simple, but that's all I really thought about - run, run your guts out, run hard, "careful" be damned.  I felt my effort more in the lines of a 10k, but I didn't really care.  Wasn't racing about learning what I had in me?  I had my fun at Blue Sky, now it was war.  The hills almost paralyzed me, but I trudged upward and was surprising happy when I reached the top of them all at mile 12 with tons of energy to spare.  I ran the last mile (1.33, actually) the fastest yet (7:35) and landed across the finish far better - and happier - than I hoped a mere 1 hour and 47 minutes earlier. 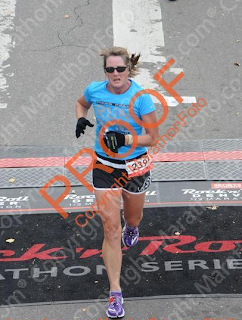 - I've been running the vast majority of my longer runs on my treadmill for CIM, like 20 miles long.  I know that sounds gruelingly poke-your-eyes-out-with-the-nearest-sharp-object boring, but it's a mental challenge for me.  If I can stay on this damn thing for 3 hours then surely I have the strength to run 4 hours on the road at CIM.  Plus, it's teaching me to feel my pace effort without looking at my watch 5 billion times in a second. I just punch in the pace and pray I don't fall off.  I love the simplicity of it....bonus: I'm getting caught up on reading.  And if Emz can run 100% of her training on a treadmill and still land 8th overall at the hellacious Javelina 100 milers in 20-hours, then yeah, I can suck it up once a week for my measly 3 hours runs on the thing.  It is making me stronger, mentally.

- I have been getting outdoors, too.....
Last week I hooked up with Steve from Happy Trails for a little 17 mile jaunt around the Air Force Academy trails.  My legs were a bit trashed from the 17 hard marathon paced miles I did 2 days prior (on my treadmill :)), and I was slower than my normal trail turtle self, but Steve was gracious enough to wait for me (frequently) and the miles clicked by so fast.  That guy has a heart of gold and never once did he complain about my sloth-like pace (I almost chocked when he told me his MAF pace...um, mine's a good 2-minutes/mile slower!) and I deeply appreciated the company.  It's a rare treat when I get to run with someone, especially someone so kind and whose wife is dear to my heart.

This past Monday, Ryan had a college visit with the track team coach at Colorado Mesa University in Grand Junction (it's all becoming so real - they're leaving me!  But he had a promising visit - yay).  Steve and Kathleen sent me a detailed map of some trails nearby the college, all color coded for the girl who can get lost on an 400m track.  Ryan and I dumped off Brendan and his friend on some trails 3 hours away for their 3-day backpacking adventure (that, in itself, is worthy of an entire blog post) and headed out on the trails.

It was super windy when we arrived to the trail head; Ryan and I stood around contemplating whether we should go to the hotel and bag it or take on the wind.  Thankfully, the wind won. 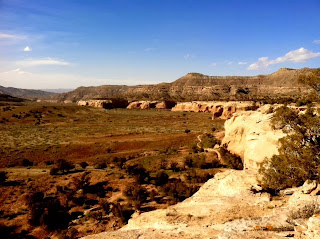 The desert trails, nestled on the eastern banks of the Colorado Plateau, are simply stunning as the Colorado River snakes it's way along the iron-enriched red sandstone, leaving some breathtaking cliffs. 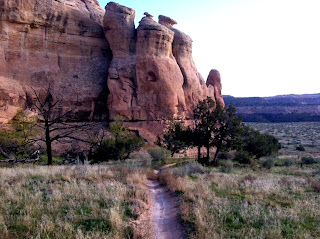 I swear, Ryan smiled or laughed the entire time.  He was so lost in time and didn't care one iota about his pace nor the fact his coach had him doing x-amount of distance, which he clearly wasn't adhering to.  Time didn't matter here; Ryan was completely immersed in this adventuresome day and deemed it, "an awesome day." And me, I was just so happy to have him here, with me, doing what we both love so much - running. Together.  It's not lost on me that times spent with him like this are numbered, so I soaked up every drop and logged my mileage that day as "a lot" in the 3 hours we played on the trails. 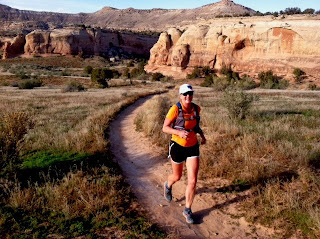 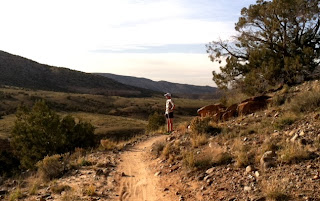 Yeah, racing means a lot to me, but running doesn't always need to be about chasing those elusive numbers - sometimes it's just about being connected. I am pleased with my two races this month but I wouldn't trade those memories on the trails non racing for any race PR or glorious finish line time.  Running is the best therapy I've ever had...it gives me the awareness of strength and gives me the confidence to face the rest of my day, my week....and my heavy year ahead.

Thank you for all your caring comments on my last post.  It's really hard for me to make big girl decisions that vastly affect the lives of my little ones - even if they are basically "adults."  It's hard stuff, but we're plugging away - together. 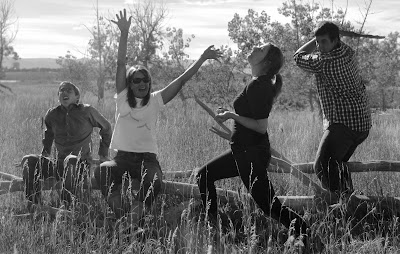