February, March, and a Race!

Let's just pick up where I left off last, in January, when I was beginning to turn things around after inhaling enormous amounts of glistening sugar cookies in December....

February:  Set my mind to training like I’ve never trained before, and February laughed in my face, then pretty much gave me the finger.   My training  took one step forward and three steps back when I was hit with some pretty emotional "life stuff", and other things I couldn't control (and things I could, but chose not to, because it was just too hard).  The highlights (lowlights):  The Polar Vortex (!!!!!); a severe case of the bubonic plague (I swear I had it!); an icy trail run that was more skateable than runnable - confirmed by a PR of most falls ever in one run (5), a broken Garmin, and a banged up palm which still causes severe pain when I attempt a pushup umpteen weeks later.  Then there was simply sheer laziness brought on by the stress of life.  I've found I have a hard time training well when I have a lot of emotional garbage on my mind; I end up spending too much time with my toxic thoughts under my flannel sheets.  I got tired of trying to run through it all, truthfully, and became utterly lazy; low days turned into stale weeks and eventually the entire month of February became depressing.  I ended the month with ~149 miles, none of which amounted to anything in double digits runs, and only 11k of vertical.  Pathetic, considering I had an upcoming very hilly trail marathon in mid-March with a pretty stringent cutoff time (at least in my sorry state).

March:  First order of business with the flip of the calendar was to email the race director of abundant hills marathon and ask if I could please bump down to the half marathon distance. Injury seems to gather more sympathetic embraces than general laziness for lack of proper training, so I did what any healthy runner would do - I lied that something hurt in my body.   I forget what ailment I forged, but whatever - mission accomplished.

With my new down-graded race, I then started my solid half marathon training plan with 10 5 days to go before Salida's A Run Through Time Trail Half Marathon.  I was excited for the race - it was my first in about 3 months and I was itching to get back out there, even though the chance of a heart-attach climbing the first hill was inevitable.  I just love the feel of a race, love the atmosphere, love the community.  I've missed it; I've needed it. 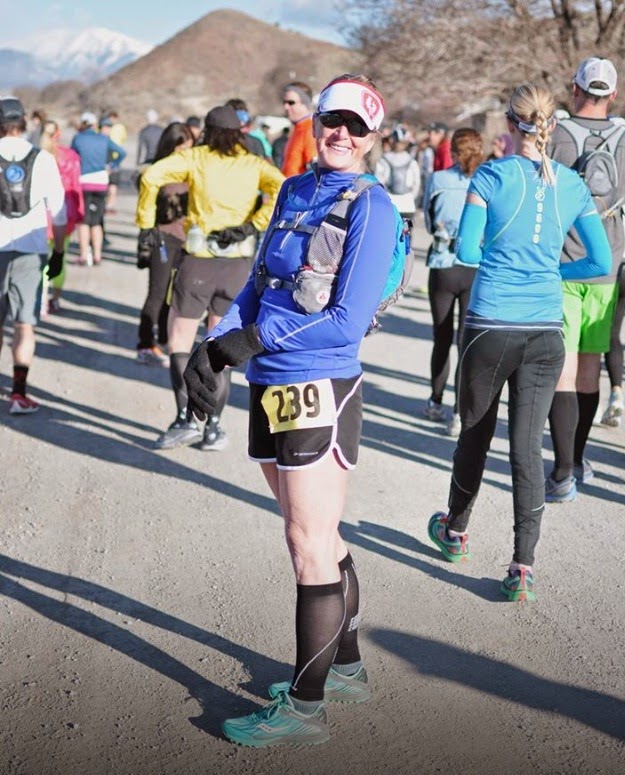 My daughter came with me to Salida.  We left the night before the race for the what should be 3-hour drive.  3-hours turned into 5-hours thanks to rush hour traffic, and then a little glitch in hotel reservations, making us drive an additional 30 minutes to another town, and leaving us eating "dinner" at the Loaf and Jug in God Forsaken Nowhere.  Our schedules so rarely sync and we have to plan so far in advance to make a date together, so it's actually sort of nice when there's a hitch in the plans - it makes the memories together more everlasting.  Sure, a couple days soaking up rays on the beach in Mexico sounds like a better mother-daughter bonding time, but these days I take what I can get. 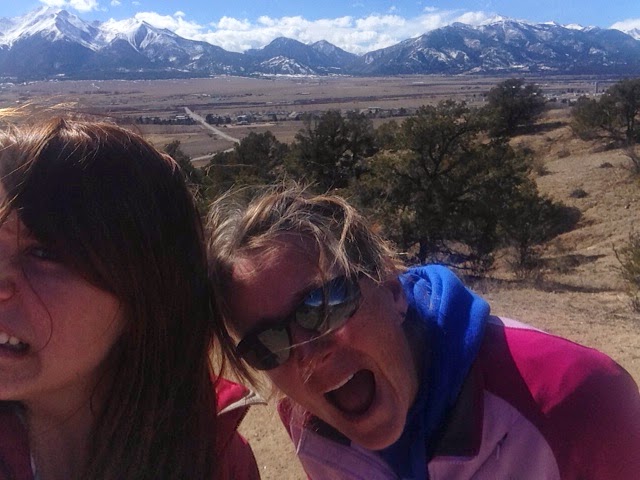 The race was only 13.1 miles, with 2200' of climbing and starting about 3000' higher than I live.  Should have been a piece-o-cake, but in the back of my mind, I knew it was going to be a doozie - considering that bastard, February.

In my current state of craptastic fitness, it was HARD, guys.  I mean by-mile-9-I-desperately-wanted-to-lie-down-right-then-and-there-and-take-a-nap hard.  I have never felt like that in a race.  Never!  And it wasn't really a "hard" course - it's just that stupid February's fault! 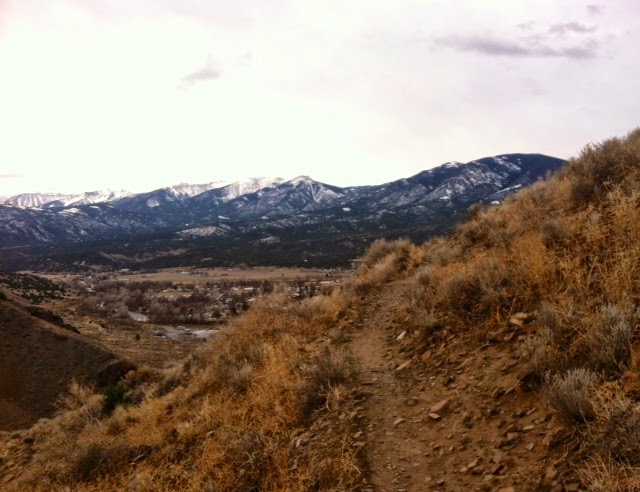 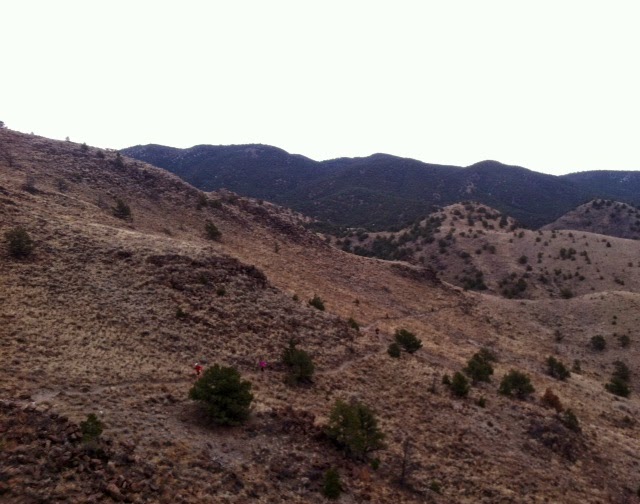 Mountains.  Hills.  Up, down, again and again.  And again and again.  Rocks I had to sidestep down, because in my hiatus of running hills, I've reverted back to being a big 'ol chicken on them (and a still screaming palm to remind me what a klutz I am).  At two points during the later part of the race I thought I was lost as there was no one around me within eyesight, so I backtracked my steps until someone come along.  I walked.  A lot.  More than I needed to - simply because it was easier and I wasn't in the mood to exert too much energy fighting this thing.   Even the downhills - my love and joy - were difficult on untrained quads.

I deserved exactly what I got out of that race, considering what I put in it to get there.  But I was secretly disappointed; I had lost far more fitness than I thought, and this race slapped me a pretty high dose of reality.  A few months ago a 50 mile race in some serious altitude with some kickass climbing yielded better results than this 13.1 (13.4 if we want to be specific, and we do!) mile race which caused me to reach the pinnacle of my physical limits within a couple hours. 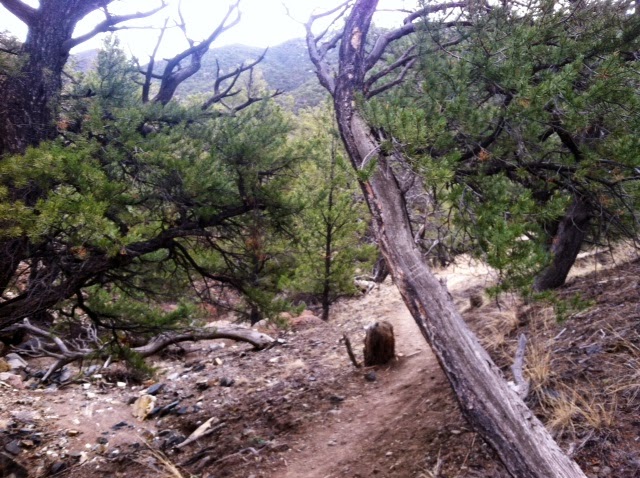 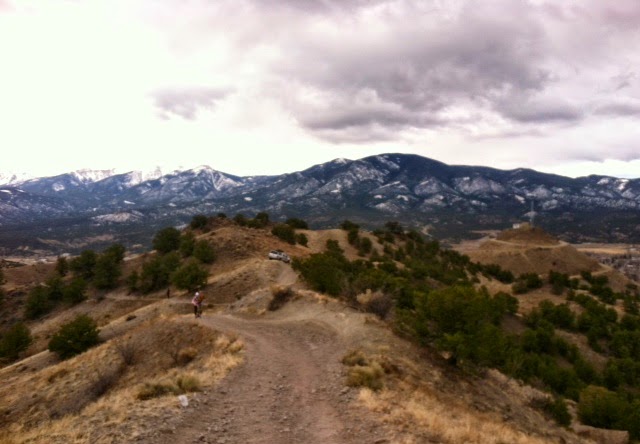 But I loved being out there; back on the trails, back racing.  And I'm glad I did it, even though I wanted to lay down and die at mile 9.  I always say no experience in life is without value!  No setback means anything about your character as long as you don't accept it as your destiny.  I came home from that race feeling a lot more energized and some much needed motivation about getting my hiney back out there running, especially when those dark, sad days where the strength to crawl out of my flannel sheets to get a drink of  water takes all my willpower hit me.

It seems as if human nature dictates that we make necessary improvements primarily in the wake (up) of loss.  At least it does for me, and I'm excited to get back out there.  With the trees budding and my daffodils blooming (and my allergies screaming!), the season's changing....perfect time for a season of change for this girl.

Oh, and guys, my race team shirts and jacket arrived the other day....sweet!  Truly honored to be part of Runners Roost Mountain/Ultra race team! 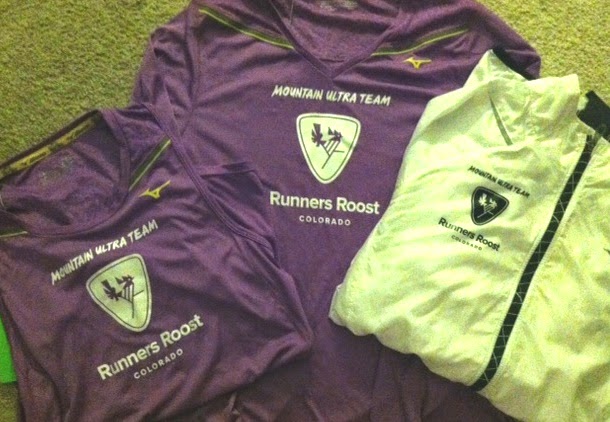