Way to Be Tough 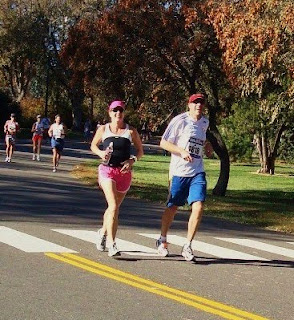 There couldn't be a more gorgeous sun-filled, blue-sky'd, autumn day on Sunday for the Denver Marathon. The morning started crisp and cool, which was ideal for marathon runners....but it quickly warmed up and by mile 15, I could really feel the heat of the sun rising and warming up to uncomfortable temperatures for the last few miles. Unfortunately, this heat and a few other predicaments left Jim not finishing in the range of his hopeful time finish line clock. Still, I couldn't be more proud!

Rise and shine and in the car headed towards downtown at 6a.m. Parked and got Jim to the start line while his wife, Jane, and I went and watched the gun go off and Jim cross the start line. No time to lolly-gag, I needed to be at City Park by mile 6 and we had to book it to make it. Mile 6: here he comes and off I go, Gatorade in hand, and pace a wee-bit ahead of what he predicted. A good 15 seconds/mile ahead. I had a few concerns but I really don't run with Jim, only have run a few races here and there with him and made him once run hill repeats with me, which I could never get him to do again. He said he felt good here but, too, expressed his slightly excessive speed. I was not going to say a word about pace. I've done the "start out too fast and kill yourself later" game - in fact, if there is a winner of such game, I have to hold the gold medal here. But I have no idea if this is fast for him or not and now wasn't the time to preach holding your pace, so I just muttered a few words between large inhales to slow my erratic breathing (this pace was close to my tempo pace), and ran to the 8 mile marker with him. Jane and I walked back through ankle deep leaves to the car and headed to mile 14.

We got to mile 14 about the time the front runners were rounding the curve; I really enjoyed this section watching all those out in front and cheering them on. I stood on the corner and said my favorite line: You're so strong, keep it going! I think this is more empowering then the, "looking good" verse. I don't know why, but that line just never does anything for me when I'm running. I loved this section where I could cheer the runners on, to be on the other side of the receiving line for a change. It was interesting to me how some runners were so focused and were oblivious to those cheering around them and others were so receptive; they'd smile or wave or even offer a gesture of thanks. The sun was shining, 17th street was lined with large trees full of autumn leaves canopying the street, and I was having the time of my life.

Jim pulled up right after the 3:30 pace group and off I went. I had a bottle of Gatorade for him to exchange but Jim didn't want it. His pace was slowing a little here, too, and couple warning bells went off here also. One, it was getting warmer and I didn't know how much Jim was drinking but I didn't think it was enough and I knew he wasn't eating enough. Having partaken in the lack-of-nutrition glee in Portland just two weeks prior, I advised him to eat something more than a few sport beans. All I could do was advise. Jim also mentioned here that he was glad to see me. Hum...if anyone's "glad" to see me, there must be something wrong :). But he said he felt good though slowing his pace down to where he felt it more comfortable. Okie-dokie. I let him go at around 15.25 and said I'd find him at mile 19 for the long stretch to the finish line.

In a melee of obstacles of Jane not being able to find a place to park at mile 15 and thus not there to pick me up, we were not able to make it to mile 19, which was on the west side of Washington Park so had to suffice to be at mile 20, on the east side. I stood there and the one thing that was on my mind was the heat: it was getting really warm. Jim came in about 10 minutes later than we anticipated and voiced his concerns over cramping in his legs. My mind quickly turned into warning signal of dehydration. I had offered him salt pills earlier in the race but he didn't want them then and I failed to bring them with me this time, having left them in my long-sleeved shirt, which was now in the car since it had to be in the low 70's. Darn!!! But it was probably too late for them now anyway. Mr. C. walked a little here and I knew his mind was gone and he was hurting bad. I tried my hardest to just talk about anything - mindless chatter just to keep him distracted. I talked about Boston qualifying and how one day he's experience it, too. I talked about my race in Big Sur, CA last year and how warm it was and the cramps I got and how I had to walk. I talked about how I was so dehydrated in San Diego marathon and didn't drink enough. My goal here was to just keep him from being reminded how much he hurt ... and also to let him know that his pain wasn't only his. Each and every one of us marathoners have pain; it's part of the experience. It's why we do it...because it's not easy.

Jim's son Will joined us the last two miles and I ran off to the side more so that the two of them could have some time together. People cheering were lined deep as we entered downtown, cheering for Jim, which his name on his bib, and probably wondering why the heck I didn't look like death. The guy with the semi-transparent psychedelic speedo and clown nose and wig, passed us at the end and for the life of me, I'll never forget that ungodly sight. Wow.

Will and I pulled off to the side just before Jim crossed the finish line in 3:56. I was honored beyond words to be part of his first marathon. Thank you, Jim, I had a great time being your pace car and WHEN you get to the start line of another, I'd be honored to be there for you again!

As for my running:

Today I went to massage therapy again. I'm hoping this isn't going to be habitual, I'm not sure I can afford this little luxury for too long. But achy glutes and a strained muscle in my shoulder thought I'd better. I must be a sucker for physical suffering because OWIE!!! She digs so deep into my glutes and my calves that I cringe even before she touches me because I know it's going to be excruciating. I have (had. Please be "had") more knots in my left glute and some trigger points in my left calf. A big knot now in my left Trapezius Muscle (shoulder, kinda), too. I mean, really....do my muscles know the instant I walk out her door and decide to unite and see how many knots they can form? Cuz geez, I was just there two weeks ago and she got them all out and it's not like I've run a billion miles since then. I schedule another appointment for the week after next, just in case.

I am feeling tired lately and hope it's not a warning sign of something big coming on. I think I just need some sleep. My diet's been so far off the charts. 3 more days of work and then I'm off for a week. Taking the boys, along with my aunt, down to New Mexico for a few days. I'm looking forward to a change of scenery for a bit.

Halloween 5K on Friday night that I'll probably do with the boys. It was really fun last year but I SUCK doing 5K's. Honestly, they have got to be the worst race ever invented. Let's just run your guts out, literally, for not 1, not 2, but 3 miles. Good speed work, though.

You sound like a great cheerleader and supporter! I dislike 5ks more than you...I was just telling me husband that last night. They always leave me feeling like I should have done more!
Happy massaging, I go today too!

Aw, your post is great! I've never paced anyone and it sounds like you ddi a great job! It can be almost as hard I imagine as running the whole thing yourself!
So cool you have done Boston and are doing it again in 2010! Hopefully we will get to meet up there!