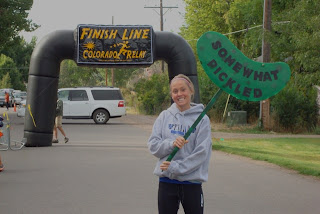 My third leg was causing me great concern how I could run on my ankle. When it was time for my leg to roll around, about 5:30am, it was really cold and my ankle was throbbing. I ran a bit in the parking lot to test it out but I just didn't now how it would work. I also realized I had not eaten hardly anything since like 5:00 the previous evening and had run once since last meal so I grabbed a banana and a cupcake someone had brought - hoping that the sugar would fuel my overly-tired state and pump my blood flowing for the 6.10 miles (which turned out to be 6.80 miles) of about 100' elevation loss along the gorgeous Glenwood Canyon. Of course, it's dark and I had to wear that dumb headlamp again but I've been on this bike path this summer with my boys biking and knew the trail well so was not so nervous about being lost like the last leg. I sat in my car because it was soooo cold and I looked out the back window for my teammate to come in - that's how lame and un-spirited we had become that late in the evening. We were all so tired and lethargic. I saw Denise come in and I jumped out of the car and met her at the exchange and took off. I was a little freaked at the ankle (lack of sleep certainly fuels the freak level up several notches!) and at first it was hurting but eventually, it just gave in and I was able to run an incredible leg, even clocking the last two miles around a 7:45 pace. Maybe it was the cupcake consumed prior, I'm not sure, but I felt better on that leg then I did my previous two...which, for the amount I had already run and the fact I was having intestinal problems from the diet and the lack of sleep and, of course the ankle, I was pretty stoked! My predicted time was 57:51 and I ran 54:54. I'm not sure where the energy came but as the sun came up about 6:00 over the canyon walls, I felt energized and I just took off.
I guess we could chalk up our totally screwing up and getting lost out of Glenwood Springs (if I ever see that town again, it will be too soon. Ha) on how blatantly tired we were but we totally rushed to get to Carbondale to all cross the finish line together. It was really one of those very emotional times in my life that I felt truly blessed to be where I was at that moment.
I could write a novel about the race and the experience I endured and how it changed my life, literally, but I will stop and just say that this race was, by far, one of the most memorable I have ever done strictly because of my teammates. We all pulled together and rooted for each other and were compassionate and understanding no matter what. I loved this most. We were all united with the same purpose and even though we didn't all know one another at the beginning, we were tied together at the end by persevering whatever obstacles we had and finishing strong. I made some new friends along the way and learned that I am truly blessed, to the point of overflowing, to be living a dream of being a runner!!!
I now enter the Portland taper, my least favorite part of the marathon training. The taper....the fleeting time when your homework is done, you are as fit as you are, and the final goal remains to eat well, rest well, avoid germs and fluke injuries, and stay in the zone. It’s about getting the mind to accept what you’re about to do. The taper to me is more about getting the spirit aligned with the body, and ideally they merge right before or on race day. I never like the taper because I always struggle trying to get my body in that proper mental alignment.
But after the relay, I am ready for taper week …. ready to see where I land in Portland. As one teammate, Matt, said to me when I was all whiny and didn't really want to go out and run my last leg on my sprained ankle: do the best you can do and that’s all you can do . Yes, I will go to Portland and do what I can do .... and hope I do well.
Remind me that I need to go on more adventures just before the taper. 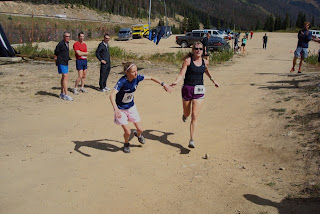 Me handing off to Nicole on my first leg 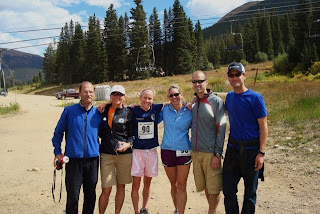 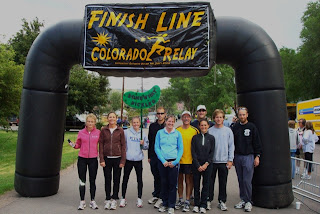 Great stuff, love the handoff picture. You should blow that up.
E

very good recap of the relay. having doen two relays this summer of 185 miles each i know what you mean abouyt the camaraderie. it's great to pull together with a group and become friends in so short a time. enjoy your taper to Portland. I am as nervous as heck about TOU this sat but will give it my best. JC

Your team did great. It was fun running with you guys and watching you come together as a team.

I am so glad you had fun and enjoyed the race and event. The weather was perfect.

Nice job on the blog write-up and the pics!