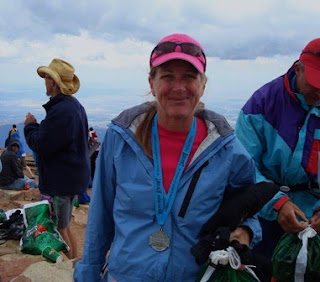 I wrote this entire blog yesterday but accidentally hit some button and it mysteriously disappeared. Ugh. So here I go again....
As you know, I agonized for two days about what to wear, I was so worried about falling temperatures as I climbed 8000'. I also know Colorado weather in the mountains can change in a heartbeat; I had to be prepared. I have lived in Colorado for many years, and pretty outdoorsy, and even worked at REI for a stretch - so I own a boatload of outdoor gear. But I felt I didn't have what I needed...and I wasn't even sure what that need was. I combed my super-outdoorsy girlfriend's closet for about an hour, stealing some wind-proof gloves; her brand new, never worn way cool windbreaker and her wool hat. I then spent an hour in the local sporting good store trying on, and purchasing, capri-length tights - thinking these would be the happy compromise for my leg as I was so torn between shorts and long pants.
Turns out, I needed none of it; the weather couldn't have been more perfect. Starting in the low 60's at the start, quickly warming, until you reach much higher elevations, and then only needed my jacket for about the last 2 miles. That's pretty rare for any 14er, especially Pikes Peak. 100% opposite complete from last year's weather.
I won't go into every detail of that grueling race but will say that I am done with it and hope I have the common sense to never do it again. As I was climbing, I actually was feeling pretty well. I ran where I could and walked when I couldn't. There's just nothing you can do about that - your body either is part mountain goat or it is not. Mine is not. I got to the first check point at mile 7.64 in 2:07, feeling pretty stoked I had made easily made the cut off of 3-hours (still, I made it to this point last year in about 2 minutes less. In worse weather. So I was a little bewildered. But, I hadn't been sweating profusely until this point, like today, either). The second check point, mile 10.2 I hit at exactly 3-hours, well below the 4:15 check point. I am really encouraged because I am feeling really good and I am making making some ground. I also start thinking that I'm going to be able to make the summit in 4:15, the required time that you need to be able to run in wave 1.
That ALL changed not too long after the second check point.
I cannot express in words how physically demanding this course is. I mean, 8000' in 13.5 miles is steep. It's more than steep, it's demoralizing. After you leave mile 10, you start to also leave tree-line and thus, the trail turns to sheer rock. No more dirt to soften the trail and no trees to block some wind. You are totally exposed and navigating large outcrops of granite. My legs turned every direction just to take one step over a rock. It's no wonder today my legs muscles are sore in places I didn't know muscles existed.
But what got me most was the lack of air. I have hiked plenty of 14ers and felt I was pretty acclimated to air at 50% less than when I started but I guess I've never encountered a continuous hard vertical climb, without stopping to rest some, when scaling these things. And I can honestly say I've never climbed anything so brutal as the end at PP. I was breathing okay, unlike many around me whose wheeze was really starting to get on my nerves, but my heart was pounding harder than I think it ever has just to keep up with what little air I could get in my lungs. If I stopped to get a little extra breath, I would start to get light headed so it was easier to keep moving forward. I'd look down at the ground and my one prevailing thought was that for each step forward, I was one more step to the finish. I you've seen those documentaries about Mt. Everest where people comment you can barely move more than a step pre minute...I could relate. I looked at others around me and was in awe at the crawl we were producing.
My hopes of finishing under 4:15, which had only entered my head somewhere about mile 10, was quickly diminishing. It took me an hour and 36 minutes to go the last 3 1/2 miles and 40 minutes alone to go the last mile. I looked up with one mile to go and figure there is no way in hell I'd be able to climb another 800' in a mile.

Somehow I made the summit, crossing in 4:36. It was one of those feelings of joy as I finally hauled myself up that thing; something that has been on my wish list for the past 24 years since I first moved to Colorado.  If I hadn't had to go to the bathroom so bad from step one and never wanting to take the time to do so at the first check point, I probably would have had a few emotional tears to shed. Instead, I got my medal, found the restroom (which was in the medical room - I was relieved I wasn't one of those lying on a bed with an IV in my arm), got my killer finisher's black jacket and a few grapes then made my way to the line to catch a shuttle back down to the bottom. I had a great conversation on the shuttle wtih a woman who just ran the Big Sur Marathon in 3:55 and qualified for Boston with that time.  She was my hero of the day.  She was one of many.
I got down to the bottom at the start line finally yet had not heard from my NYC friend, Hiroshi (who, btw, is doing the full marathon today...after doing the ascent yesterday). I wandered around a little bit and ate a few bites of this gross sandwich from Subway (I couldn't believe how starving I was. But it was a good 7 + hours since I last ate) and decided Hiroshi had gone back to his hotel and I'd just check in which him later. As soon as I got to my car, though, he called me - he had just gotten to the bottom. I drove back then to the start and met up with him for a bit; he had a bad race and finished in about 5-hours. He was bummed and very concerned how he would fare today on his full marathon. I can't even imagine making my way up that thing again today. I'm sure he'll do well..but I fully understood his dilemma. While standing there talking to him, Jay from the Prostate group walked by with his friend and we caught up. He finished 4:12 and was very happy about that, a vast improvement from last year's 4:40. He said that Craig M. finished in 3:22 and Matt in 3:26.
I've determined that my 41st place finish in my age group is actually pretty good. I am not a mountain hill climber and I do not train to be one. I was a little bummed that I didn't make the 4:15 first wave cup-off time but unless I want to devote my training to uphill trail running, I will never improve enough to knock 20 minutes off my time. And that's okay, I am fine with that. I am 46, I have a slew of other things I want to accomplish, and Pikes Peak is a check mark off my bucket list of challenging races I've wanted to do. I bid Pikes Peak good riddance let's and bring on the next challenge: I'm ready!
Posted by Jill at 2:08 PM

Great job on a tough race. I remember gasping for air at 14000 feet when I did Leadville 7 years ago and deciding right then that I was never going to run that race again, especially after the two rude receptionists in the hotel would not let me come back and shower after I finished the race, ( after the check out time !!!)forcing me to drive 8 hours home all smelly afterwards.

Nice Job Jill, I know it must feel good to check that one off your list.

I think you did great. Plus it's got to be such great training. I'm jealous you get to do this kind of stuff at altitude, while I'm stuck doing lots of rolling hills, but at low altitude and no mountains.

I'd love to be able to train on such hills.

Having said that, and even though I enjoy hilly races, I don't think I like races that are SO hilly that it just turns into a powerwalk. I want to run, not hike. One 50K I did was so hilly I might as well have had a walking stick.

Still, I'd probably try PP too if I lived there.