Suck it up and DO IT 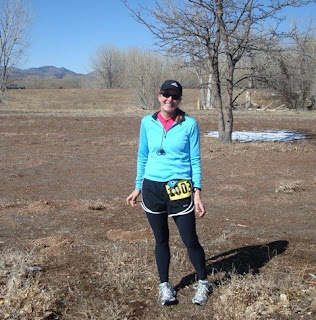 I ended up running the 10-mile race today - after an internal tug-of-war deciding whether or not my head cold would ALLOW me to run 10 miles or not.

My daughter, Abbey (now 18 *gasp*) is a senior at Regis Jesuit Catholic H.S. which is just a couple miles from my house. As part of the academic regiment, students are also required to participate in a variety of clubs and activities; supposedly to broaden their horizons on some level. One group that she is involved is a member of leadership link crew and she had to spend the weekend at the school as the freshmen had a retreat (bonding fest). I'm not sure why this weekend event turned into quite the dramatic ordeal, but it did and everyone in the house heard for at least the past two weeks how much she dreaded the upcoming weekend. I mean, MAJOR drama! Finally yesterday, I'd had enough of the relentless complaining and I told her that there was nothing she could do about it; she had to go and it was time to just suck it up and do it (what a sympathetic mom, huh?)!
I thought about that statement and Abbey doing something today that she really didn't relish as I stood on the start line of the race. No, I didn't feel that great but I wasn't running a fever or enduring some life-threatening illness (that I am aware of anyway...I still question if there's a roaming tumor somewhere in my body); I was blessed to be here!! Truly blessed. Just suck it up and do it, Jill, you have no valid reasons not to. So I did. And I had a great race!
It was a balmy 18 degrees when I woke this morning and I compensated by bringing enough attire to clothe a third world country. I do NOT like to be cold...but worse, I do not like to be hot while running. And I, of all people, know that Colorado warms up quickly and so does my body when I run. Aka, I was way overdressed (thought so at the start, knew so by step 5). Usually when I run a race, I don't put my iPod on until awhile after the start; I generally enjoy the conversations of those around me and just take it all in. This is fine in marathon; not so much in a very small local 10-mile race. No one was really speaking and I wasn't particularly enjoying the rasping of people's breathing. I thought I had my iPod all ready to go but when I hit the start button, nothing happened. Err. I took the entire thing off my waist so I could get some tunes going and not focus on my own wheeze; I even managed to make a "playlist" on the thing last night....something I had been aching to do for the past year. Or so. I fumbled with this crazy thing for well longer than the normal technology functioning person would and before I knew it, I was at mile 1 at a 7:37. A wee-bit too fast. But I was feeling good. Mile 2 was downhill and I hit it at 7:22. Hum. I need to slow down. Mile 3 was 7:36....and this pace was with a pretty major uphill. Okay...now I just need to maintain and not screw it up by continuing with this pace. I didn't have a particular end-time in mind but I knew if I played my cards right, I could run around an 8:00 minute per mile average(1:20). By mile 4 I was melting and seriously wondered if I should stop and shed some layers. No time, no place; I just needed to fo 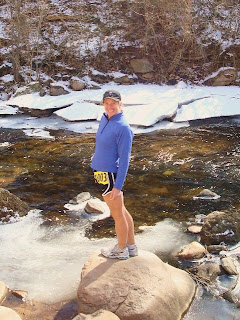 cus and keep moving. After mile 5, the course becomes a hodge-podge of continuous rolling hills and switchbacks galore. It's very pretty, though, with the foothills as your backdrop, so it gives you a little lift. And unlike last time I ran this, the winds were not a major hindering factor. Thank you Running Gods! I definitely slowed, to around 8:15's, for the middle miles though it really didn't feel that slow. My quads were starting to ache; weight training on Wednesday was rearing it's head and I did not feel the strength I normally do on the endless ups; I kept praying for the next downhill to arrive so my quads would stop complaining. I was passed a lot in this section and that's okay....I was feeling strong and pushed my legs as best I could. When I got to the last mile, I dug down deep; I paid attention to my body and re-committed myself to the last mile. I hunkered down and took off. As I did, I heard a guy behind me try to follow me; he lost quickly (yes). I focused on some people in front of me and I managed to passed several. With a half mile or so to go, I focused on the guy in the black shorts and he became the next to pass. And I did, right at the end, and crossed the finish line happy and breathless at 1:19. My last mile was a 7:52. This last mile surge was, by far, the highlight of my entire race!! That I had the strength inside me at the end to give it one last push; that's what racing means to me!!
If you recall that miserable January 10-mile race attempt post-cut week and how my legs were just along for the ride and my body could no longer run 10-miles at a respectable pace than I could go perform open heart surgery, today's legs felt alive and strong. Not fresh, as I had done a lot of running and I was still feeling the effects of Wednesday's leg weight training, but in comparison to a month ago, head cold and all, I managed to shave off about 7 minutes from last month. THIS sets the measuring stick for my 2009 season and I'm very excited to see where the ball lands this year. I don't think I'm going to manage a half marathon PR in Atlanta next month but I think I can knock some time off from last year's race (I hope! If I don't get my head twisted before like I can easily do). I think it's going to be a great year!
My friends all managed to shave off a some time from a month ago, too. I'm so proud of you guys, you rock!! We went to lunch afterwards and walked around Morrison. It was a day to celebrate....
Brendan went with a group snowshoeing today up Mt. Sherman, summit 14,036'. This actually was quite the adventure for him and when he returned home today, he was beaming!! He's climbed a couple 14er's before but never in winter and never in snowshoes. He did not make it to the actual summit, coming only about 300' from the top when he experienced a lot of light-headedness, but wow...I am super proud of him!!! Way to go Brendan! He's exhausted but grinning from ear to ear.....just like his mom!
I am grateful to be shuffling along in ordinary miles, grateful that I have the honor of joining the race, any race (head cold or not), grateful that I am not deficient in endurance or stamina, grateful that running empowers me and grateful that I am part of this legacy; it's something worthy of passing on.
And as a bonus - I placed 3rd in my age group! :)
10 miles run
Posted by Jill at 6:02 PM